Boiling water is still one of the most common ways of ensuring it is sterile and safe for drinking. The intense heat is capable of inactivating bacteria, viruses and spores which might be present in water of questionable source. Ultrafiltration, on the other hand, does not destroy, but physically retains >99.99% of viruses and an even higher proportion of bacteria and spores by size exclusion on its nanometer-sized pores.

In this blogpost I want to compare the amount of time and energy required to sterilise a litre of water by heating in an electric kettle, versus filtering with a small membrane ultrafiltration device. The conclusion is offered first, and later on the detailed solution and calculations follow. So let’s begin!

To bring water to the boiling point, one needs to supply heat. If contamination is present in the water, prolonged exposure to heat will denature the proteins that bacteria and viruses are made of which renders them inactive. The US Environmental Protection Agency advises to keep water boiling for one minute at sea level, and for three minutes in the mountains. This is due to the fact that with a rising height above the sea, the atmosphere pressure drops, and that in turn lowers the boiling temperature of water. Water was boiled with a 1000 Watt element in a beaker.

Filtration will be taken care of by a 0,2m2 UF element with a hydraulic permeability of 1l.min-1.bar-1 with a pore size of 25nm. Water pressure has been supplied from the tap, which is assumed to be 1 bar.

How does filtration compare with boiling in terms of costs and comfort? Ultrafitration: 0.001 cent and 1 minute. Boiling: 0.16kWh, 3 cents and 42 minutes.

In this case filtration has been shown to be 3000 times cheaper, 42 times faster, and having 3300 less carbon footprint.

Additionally, ultrafiltration removes solid materials which are present in water – silt, fine sand, provided the filter is integral-without any pinholes or faults.

The integrity of a UF element is a vital consideration, since it plays an important psychological role. People believe that “boiling” is efficient because of education and anecdotal evidence. However, filtered water is more comfortably made, cheaper and less environmentally demanding than boiling. As soon as consumers gain confidence in its safety, nothing can stop them from adapting it.

In case you’re interested to see this worked out for a camping/gas stove, or if you have any comments, let us know! 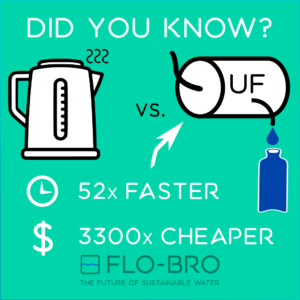 For this exercise I made these assumptions:  we have 1liter of 25 degree Celsius water (room temperature), with heat capacity 4.18kJ.kg-1.C-1 in a cup without a lid for faster cooling; water boils at 100 degrees C. The heating element is a 1000 Watt spiral.

In order to heat 1 liter of water, we need to supply heat of : 1kg x 4.18 x (100-25) = which is equal to 313 kJ.  Since the cup is not perfectly insulated, we will lose heat into the surroundings while heating. By an experiment at home, I determined that temperature of water in a beaker dropped from 100 to 50 degrees in 10 minutes, so let’s call this representative for a general “kettle”.

By putting some temperature data into the Newton cooling equation, I determined what the cooling constant “k” of the system is.

When the known temperatures (T) and time (t) are substituted

The exponential cooling constant for “k” this system was calculated to be 0.0183.

Knowing the constant, I could solve how much time it takes for the beaker to cool to approximately the original temperature, from the moment it stops boiling = 42 minutes. The negative of the derivative of this cooling line multiplied by the heat capacity of water to give the “energy dissipated” as a function of temperature. (I solved this numerically in Excel). When the beaker is at 100 degrees it emits 0,57kW of thermal energy into its room temperature surroundings, whilst when it cools down to 40 degrees it gives off mere 0.1kW.

With this non-insulated system and 1kW kettle, water starts boiling in 540 seconds, which is equal to 9 minutes. Then water ought to boil for one minute and then it starts cooling for 42 minutes before it reaches roughly room temperature. Thus 42+1+9 = 52 minutes to prepare a liter of room temperature water by boiling. This required 602 000 kJ of heat energy, assuming 100% efficiency of the heating loop this equates to 0.16 kWh of electric energy, thus roughly 3 Euro-cents. So boiling takes long, but it seems very cheap!

Heating, Boiling and Cooling water in a kettle or a beaker. Total time 52 minutes.

For this purpose we use a small UF element which filters water at 1bar pressure, similar to a pressure in a faucet. The flow of water through the element is proportional to the pressure, so let’s assume a hydraulic permeability of 1 liter per bar per minute, which would be typical for an element containing 0,2 m2 of membrane area, roughly the size of a tea cup. The filtration time has already been determined: 1 minute.

The energy need to filter water Ef is the mass of water: 1kg, multiplied by the pressure in meters of water column (head) and the gravitational acceleration (g).

If you consider the carbon footprint of the boiling method: 0.16kWh of electrical energy, is roughly equal to 160 grams of CO2 emitted in a coal fired power plant.

The second method, results In 50 mg of CO2 emitted, 20 times less than in a single human breath.