From Flores we took a flight back to Bali, where we spent two more days surfing and cruising around the chilled-out town Canggu, tasting coffee and tea in Ubud.

A long travel day/night, including two flights and 7 hours of sleep in the McDonalds of the airport in Kuala Lumpur, finally brought us to the Phillipines! We were welcomed in a country where the Christmas songs are played everywhere, nuns greet you along the street, and outdated flyers with “Duterte for President!” pollute the streetscape. With the majority of the country being Catholic it is much different from the Hindu, Buddhist, and Muslim countries we’ve visited so far.

Our first stop was in Malapascua, a small island north of Cebu. Upon arrival we saw the aftermath of the tropical cyclone that rushed over the country the day before we arrived. Many fishing and diver boats were smashed to pieces against the shore. A sad sight, especially when you realise that the average wage is about 200PHP (€4,-) per day, and these storms are unfortunately very common. With about 19 storms per year, the Philippines is the most-exposed large country in the world to tropical cyclones. 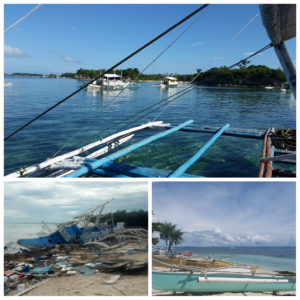 Despite all this, the people here seem to have a good coping mechanism against the storms, and pick up life with the same enthusiasm as soon as they can. The island is small, and besides several diveshops and restaurants, it seems like tourism has not really taken off yet. Which is a good thing, because without many tourists it’s easier to get better familiarised with the Philippine culture.

In Malapascua Radek did his first try-out dive, and I did a refresher course. We saw some good coral, but due to the fact that the cyclone recently rushed over this part of the country, the visibility was not outstanding.

Uncertain of our next destination, we were recommended to go to Camiguin. A night ferry from Cebu City (which was surprisingly comfortable) combined with tricycles and motorbikes brought us to this island. As with almost all the places we visit, one of the first things we did was renting a motorbike.

Whilst riding around the island, we soon learned that it offers many, many things to do! One of the great surprises was the “sunken cemetery”. Once a resting place for the deceased, the area is now covered by the ocean, and the underwater life has taken over. We weren’t sure what to expect from this place, but as soon as we entered the sea, we were both stunned by its beauty. Without a doubt the most beautiful and colourful shallow coral we’ve seen so far, was spread around the area. Besides coral, the sunken cementary is also home to several giant clams, which grew up to at least a meter in length!

With so many activities packed into such a compact area, we had a very eventfull week! Including hiking the highest vulcano of the island (Hibok-Hibok at 1,332m), visiting the Katibawasan Falls and mangrove, and ziplining over a lake.

Before we left for the Philippines, we heard mixed stories about the cost of living there. Some said it was very cheap, and others said it was one of the more expensive countries in South East Asia. We now realise why we heard so many contradicting stories. The life here is cheap indeed, a beer is about €0,80, which is always a good way to compare prices in countries 😉 However, traveling is rather expensive and very time consuming, as this country is spread over 7,000 islands! Nevertheless, if you limit the amount of flights you take, and travel more via land and ferries your wallet will not suffer.

From Camiguin it took us almost two days to arrive to Siargao, which is known as one of the best surfing spots in the world. After trying out surfing in Koh Chang and Bali, we were eager to spend a good week to make some proper progress in our surfing skills.

Siargao packs a great variety of surf spots, from beginner to advanced. After a few months of travelling, it was good to have some sort of routine back into our lives, especially if that routine is built around surfing! Every day we woke up early in the morning to catch the morning waves, then had lunch in one of the relaxed beach bars to recharge before getting back into the water, to spent the rest of the afternoon surfing.

Despite our sore arms from the endless and endless paddling, and despite the countless scratches from the coral and the surfboard, it was absolutely a great week! Riding around on a scooter or bouncing in a boat together with your surfboard on the hunt for a good surfing spot, gives you a great feeling of freedom. Especially when you finally catch that one beautiful wave, and surf towards the stunning golden sunset.

Video: Island hopping and surfing in the Philippines

Click here to see the map of our journey, and the full travel blog