More than a year ago I wrote a blog on the issue of low grade plastic packaging disposal, litter, by burning it in stoves. Although outside the field of my direct expertise, this has turned out to be the most read article and keeps getting some furious comments. I decided to take a second look on the issue and find some more evidence, why I believe that burning plastic has surprising benefits, which outweigh the downsides.

There is a dogma that burning plastics is bad. I think it’s important to challenge it because the ups are worth considering. There is an undeniable problem of solid plastic polluting the land and oceans and the situation is not going to get better. The world’s industries produced upwards of 250 million metric tons of polymers in 2016. Only 9% got recycled. 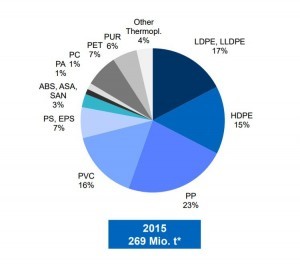 The reasons why plastics are hard to recycle are:

For these reasons, it makes more sense to dispose of used plastics industrially by burning. This is already frequently done in developed countries, particularly in western Europe, where landfill is banned.

The most produced polymers, polyethylene, and polypropylene, account for more than a half of the produced mass. The third most common is PVC.  Polyolefins, PE and PP are used in packaging since they are cheap to produce, and their properties can be tuned easily by chain length. PE comes mostly as bags, wrappers, and clingfilm. Polypropylene as buckets, ropes, cases et cetera. Other well-known polymers used in packaging are PET – for bottles, punnets etc. These are the best candidates for burning.

Another potential candidate is Polystyrene, PS. It is used for insulation, cutlery, cups and plates. It also consists of C and H atoms only, but when burned by itself it produces more soot.

The main counterargument to the purity of plastics is that they sometimes contain antioxidants, plasticizers, and pigments. The pigments are of inorganic origins – such as white titanium dioxide, or organic – such as anthraquinones and phthalocyanines. The latter group also contains chlorinated derivatives, which may produce halogenated organic compounds upon combustion.

The main issue regarding plastic combustion is whether it’s clean. The question of cleanness of artificial polymer burning has to be answered relative to the other fuelwood – a natural polymer.

In the ideal world, combustion of organic matter composed of carbon, hydrogen and oxygen in air will yield CO2 and H2O, both of these products are colorless and odorless compounds. You don’t need a degree in chemistry to tell that most fires do not burn ideally. Burning produces smoke – particulate matter (PM) and smell – volatile organic compounds. Both of these groups of by-products have negative effects on health, and should therefore be minimized. In the following part I will compare the products of combustion of commonly used fuels – natural, fossil, and several common plastics.

Let’s have a look at some common combustion by-products of wood. Carbon monoxide (CO), a toxic gas, followed by methane and then C2-C7 alkanes, and soot or other PM.  There is a list of hundreds of compounds analyzed from a wood burning stove in this WHO report , also containing chlorinated dioxins.

The products of combustion are influenced by the quality of the supplied fuel: moisture, trace chemicals, and mostly by burning conditions: temperature and oxygen availability. Generally, the most serious pollutants are PM and CO, as all others are present in trace amounts.

Combustion product of plastics, notably polyethylene, are presented in a great detail here.

PM and CO are predominantly caused by low temperature smoldering fires. When fuel is burned without sufficient access to oxygen- i.e. when the stove is fully stuffed with fuel. Low temperature of the fire is also caused by high fuel humidity, particularly wood.

The most frequently repeating notion is that burning plastics produces dioxins. Dioxin – notably TCDD – has become infamous during the war in Vietnam (for alleged large-scale cause of birth defects) and its use against Viktor Yuschenko, among others. Another related groups is Polychorinated dibenzo furans (PCDFs), with similar health effects.

TCDD and other chlorinated dioxins are formed at temperatures between 200-600 oC, by reaction of chlorine with polyaromatic hydrocarbons, which are formed by incomplete combustion. Their concentration is increased if organic and inorganic chlorine are present in the combustion process. Thus, they are more likely to occur if PVC or salt laden wood from coastal areas is burned. Interestingly, the concentration of dioxins is suppressed by the presence of Sulphur in the combustion process, and increased by the presence of fly-ash, especially containing traces of copper, which acts as a catalyst.

Dioxins in the off-gasses of combustion will be present in wood fires and plastic fires alike, if chlorine is present. If dioxins were a main concern, there would be a case against burning drift wood and biomass in the vicinity of the sea, as well as plastic washed ashore, due to their elevated NaCl content. However, while wood is hydrophilic and will absorb sea water and salt, plastic will only contain surface bound salt after the water dries out, so significantly less.

Dioxins formation by plastic combustion, except PVC, is not higher than by any other processes of combustion and should therefore not be the main argument against plastic burning.

How does burning wood and plastics differ?

Wood and plastics alike are well combustible materials, however, not readily flammable. In solid state, wood does not burn and neither does plastic. When activation energy is provided to both materials, they will decompose and produce flammable gases. The reaction should produce enough heat to sustain itself. As opposed to plastics, wood stays solid even at high temperatures. This allows wood (sticks) to create an open structure that air can flow through and access a large surface area. The aforementioned plastics liquify at a temperature below 200oC, and flow to the bottom of the fire pit, producing a puddle of melt with little surface area. Therefore, in order for plastics to burn well they need a carrier – like a candle needs a wick- to burn well and cleanly. The ideal combination is thus wood and plastic. Use wood to start the fire and then add plastic and allow it to melt on top. In this case enough oxygen will be present and burning will take place quickly.

Enough theory has been said, now it’s time for some experiments. I opened the plastic recycling bin and took a few samples of commonly used plastics, mainly as packaging or daily utility objects. The sampled polymers included PE, PP, PET and PS. For a layman it might be hard to distinguish the plastic just by look and feel, so symbols present on the packaging can help out.

In the first part of the video, the plastics are described in terms of their visual and tactile properties.  Then a small wood fire is ignited in a hearth in the garden, on a cold, but windless, spring day. Wood is placed on a raster that allows air in from the bottom. The wood fire is used to start the burning process and create a matrix to soak the molten plastic to facilitate burning.

When the plastics are thrown in the fire, they crimp rapidly, then start melting and afterwards ignite. PE burns well with a clean and smokeless flame. However, the process of burning created a typical “sweet” odor associated with burning of plastics(https://www.quora.com/Polymers-What-does-burnt-plastic-smell-like). PET burned very well clean, smokeless and virtually free of odor similarly to PP. The PS pieces were as expected, producing a smoky sooty flame and quite a bit of smoke out of the chimney, and a strong smell. I had to throw some extra wood in, to make a bigger fire and burn the soot. In case of the PP and PE, dosing by small pieces instead of one big lump, helped a lot to cut the smell to zero. PS, however carefully dosed by me, released soot.

So, is it worth burning plastics?

I think it is! Firstly, they are everywhere, are practically not recyclable and cause a huge ecological strain you read about daily. Secondly, they burn extremely well, since in chemical composition, they don’t hugely differ from gasoline or candle wax. Thirdly, burning most of them is not dirtier than burning wood, and fourthly, burning plastics instead of wood will save trees, which is essential for the health of our planet. In developed countries, burning plastic refuse is a common practice, however, advanced combustors are not an option for cheap decentralized use.

Use wood to start the fire and soak the molten plastics in, allow for good air supply. Use packaging from food, as it does not contain harmful chemicals. Avoid hard plastics, especially PVC, which is used in pipes, plastic table cloths and raincoats as that produces noxious fumes and potentially TCDD. Dosing of plastics is crucial for good combustion. A large supply of fuel will create a “rich” mixture that will lead to incomplete combustion, smoke and smell. Too little fuel, and the fire will go out.

Outlook into the future

I’ve been looking into the design of a stove, that would be suitable for cooking, like the rocket stove, but would also incorporate a heat exchanger, to preheat the incoming air and ensure higher combustion temperature. Another option worth considering is using a wood gas generator to pyrolyze the plastics and then combust the produced carbon monoxide and volatile hydrocarbons. A great initiative is to use melted plastic refuse as binder in roads instead of traditional asphalt concrete, however, with the downside of a possible creation of extra microplastics due to wear.